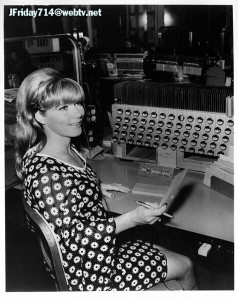 I was listening to Visalia PD on the radio earlier today, when one of the dispatchers gave a return to an officer in the field, and it struck me as almost eerie. She sounded very much like the dispatcher heard on the Adam-12 television series!

The interesting thing about the “voice actress” who voiced “Adam-12, Adam-12, see the woman…” and (my favorite), “Adam-12, a 211 just occurred, Adam-12, handle code 3!” is she was a REAL police dispatcher, with the Van Nuys division of the Los Angeles Police Department! She worked part time as a voice actor, and did the dispatch for several police shows through the years. Can you imagine the double takes people would do, if they listened to early police scanners, or happened to be standing next to a LAPD police car, and heard that voice come across the speakers? “Hey! That’s the lady from Adam-12!” Her husband was a motorcycle officer with LAPD, too.

I look at her dispatch console, a desk, really, and think… wow! How things have changed!

One of the consoles at my dispatch center.