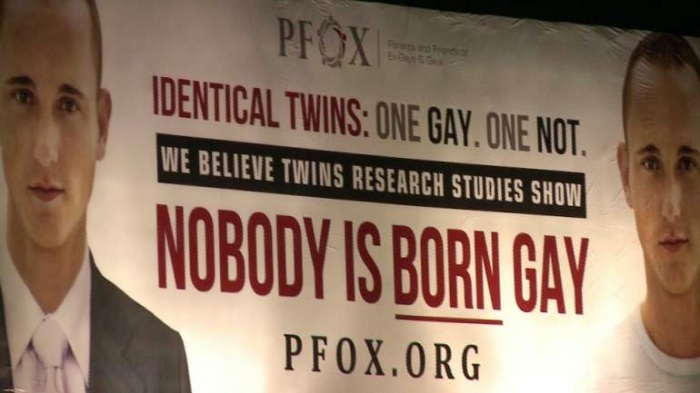 This blog was sparked by a Facebook post linking to an article at The Advocate, a long-time major gay publication.  I reposted it to my timeline, and since my Twitter feed echoes my Facebook, it also appeared there.  It’s about a former ‘ex-gay’, who has renounced his attempts to be straight, and the program he was associated with that attempted to lead others away from ‘the gay lifestyle’.  An acquaintance Tweeted me back, basically taking me to task for “knocking” people who claim to be ‘ex-gay’, and have left ‘the gay lifestyle’.

It really is a silly statement.  First, to understand the whole idea of leaving ‘the gay lifestyle’, we’d have to determine what is meant.  That phrase really grates on me, as those that use it really don’t have any idea what they’re saying.  The LGBTQ community is so diverse that talking about the ‘gay lifestyle’ is little different than trying to understand what someone is referring to when they say the ‘straight lifestyle’.  When you consider how different a straight person living a middle class life in Visalia can be from a straight person living in the slums of Mumbai or Caracas, the term ‘lifestyle’ becomes meaningless.

Oh, I suppose I could stop living my ‘gay lifestyle’.  I could quit the LGBTQ organizations I’ve joined.  I could stop blogging on Queerlandia.com.  I could quit watching gay-themed movies and television shows.  The changes I’d have to make to my ‘lifestyle’ would not be much more than that, however.  I already don’t drink or dance, so gay clubs are pretty much off my radar.   It’s been several years since I made any of the Pride parades.  I suppose I’d have to stop attending the Tuesday Evening Dining Group, but maybe not, as they’re a very welcoming lot. Several straight folks attend the dinners, so the ‘gay thing’ might not interrupt the fun.  Since I didn’t seem to get the fashion or decorating genes, my home and my clothes won’t change.  I suppose I’d have to tell the boyfriend goodbye.

What is really meant is sexual orientation.  Even if I did all of the above (and I’m not about to), that wouldn’t make me straight. I’d still be gay.  Is that what it would take to make some folks happy?  As long as gays don’t act gay, it’s cool?  If we live a ‘straight lifestyle’, things are just fine?  Because that’s all that’s happening with the ‘ex-gay’ folks.  They haven’t changed their orientation, just their public behavior.

For someone to believe that others can change something so basic to their personality, just by wishing it so, is difficult for me to understand.   Of course, some who believe in the whole “pray away the gay” idea think it’s God who’s doing the changing, and there’s not much ground to stand on when trying to have a rational discussion with those people.  All we can do is offer the stories of those who were their “stars”, and who have now repudiated their former attempts to change, and remind everyone that nowhere in science have we seen a successful demonstration of sexual orientation being something that a person can change.  The professional associations all agree, the attempt is useless, and can do great harm.

Christian Schizzel, for seven years associated with Janet Boynes Ministries and the Bachmann & Associates (yes, THAT Bachmann) Counseling Centers (they’ve changed their name to ‘Counseling Care‘, apparently they felt the need to distance themselves from their history), has joined other “ex-gay” promoters, and has reclaimed his gay identity.

John Paulk, of the defunct “Love Won Out“, has renounced the reparative therapy he once promoted, is divorced from his wife, and has issued a formal apology for the harm he did while part of Love Won Out.

Jeremy Marks ran a ministry in England for many years, trying to help gay Christians become straight. It didn’t work for him, nor for those who came to the Courage UK facility. It eventually closed, and Marks has come to the realization that orientation cannot be changed.

John Smid, formerly of Love In Action (now known as Restoration Path), and Exodus International, (also defunct) is now living in Texas with his same-gender partner.

I could go on, but you get the idea.  Reparative therapy doesn’t work, you can’t change your sexual orientation, and nobody should make you think you can or should.

Pray away the gay?  Believers need to ponder that it doesn’t seem to work.  What does that say about their faith, their doctrine, or their God?  Something is wrong, and if you believe in that all-powerful, all-loving God, then you might assume that being gay is not a problem with Him, since He has never been seen to actually step in and change anyone.  No matter how hard they prayed, or tried.

Posting links and articles about the increasing numbers of “ex-gays” who have come to realize they never changed, and that the “ministries” they attended or ran actually harmed rather than helped, can hardly be called “knocking” someone.  It helps shine a light on a practice that most of us have known for a long time is harmful and useless.

Oh, and the ‘identical twins’ in the ad?  They don’t exist.  Thats two pictures of the same man.  He’s not a twin, and he’s gay.  He chimed in from his home in South Africa recently, to denounce the use of his image in such a misleading fashion.  PFOX apparently hasn’t heard about the whole “Thou Shalt Not Lie” thing.

I suppose we shouldn’t be surprised.  The GOP controlled House of Representatives has voted and passed H.R. 5759, the “Executive Amnesty Prevention Act of 2014“.

Suddenly the Republican party is outraged, just outraged I tell you, over President Obama’s response to their refusal to do their jobs.  They’ve passed this item, much like the 54 votes they taken against the Affordable Care Act, with no hope of it ever passing the Senate, or seeing a Presidential signature.

But, by golly, they’ve let “King Obama” know in no uncertain terms that he’s not permitted to do exactly the same thing that Bush the First, Bush the Lesser, Saint Ronald, and, oh, every other President in like forever, has done.  Nosiree, not THIS President!  He’s went and gone too far, and they’re not having it!

How dare “King Obama” actually, you know, run the executive branch of the Federal Government.  (Especially since they won’t do their jobs and pass laws about the very thing they’re passing a bill condemning.  You really have to wonder about this crowd.)

A CEO of a large company (or the boss of a small one) gets to decide how the resources he has available will be deployed.  A county Sheriff gets to decide where his gang violence task force focuses their attention.  A police officer gets to decide if he writes you a ticket, or lets you off with a warning.  Nobody seems to have a problem with that, but this is “King Obama”, and the GOP can’t accept anything he does.  (even though their cronies on Wall Street are making money hand over fist, the housing market is on the rise, the Dow is at record highs, corporate profits are mind-bogglingly obscene, the 1% is raking it in, and Osama bin Ladin is dead)

So.  The Republican House has passed H.R. 5759, saying the President can’t do what Presidents have done since George Washington (well, at this President can’t.  They didn’t make a peep when George did it just a few years ago. Selective amnesia?).  They can tack it up next to the 54 votes they’ve taken against the Affordable Care Act, since none will go anywhere in the Senate.

And of course, our own Devin Nunes voted yes on this bizarre waste of time.

It’s a shame the GOP spends all of it’s time and effort on such nonsense, instead of sitting down and actually working out a compromise bill that addresses the issues.  You know, the way Congress used to do, as recently as President Reagan’s administration.  He and Tip O’Neill actually used to work things out, and get things done.  It seems the Tea Party crowd has so wrecked the Republican party by electing extremists that nothing will get accomplished of any note until the GOP ages out, and the ‘baggers all die off.  I hope the nation can survive them.