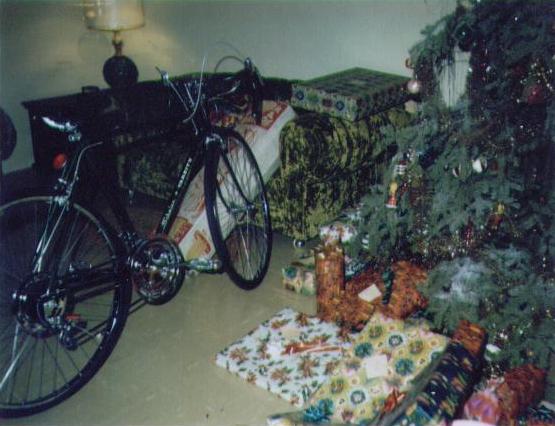 Time for my annual Christmas story.

Best Christmas Ever – 1971
I wrote this back in 2007, for my personal blog on MySpace.
******
We were telling Christmas stories at work the other day, and I told my “best Christmas ever” story.  After I told it, I thought it might make a good blog, so here it is.

The location: Visalia California, the house on Divisadero Street, just down the block from the junior high I attended (now called a “Middle School” for reasons known only to the bureaucracy of schools).

I had spent MONTHS hinting, suggesting, begging, pleading, and pretty much making a pest of myself asking for a new 10-speed.  Each time it came up, the parents made it clear that they were just too much money, and I was “not going to get one…. sorry.”  Well, Mom said “sorry”, Dad just said “NO”.  They wouldn’t budge. Not even a “maybe”, or a “we’ll see”.  Always “NO”.  By around December 15th, I had pretty much written off the bike, since, as we all know very well, parents don’t lie to their kids!  I don’t recall if I had a back-up wish list or not, and can’t recall anything else I might have asked for or wanted, but I do recall wistfully wishing there really were a Santa, because if there was, I might very well get that bike!  {Big sigh}
Well, Christmas rolls around, and despite being a worldly wise and mature 14 year old (aren’t they all?) I had a bit of trouble getting to sleep Christmas Eve.  I finally drifted off, and didn’t hear any commotion in the living room all night.

The time:  the crack of dawn, Christmas Morning.

I woke before anyone else, even my two younger sisters.  The sun was up, but just barely.  I tiptoed down the hall, turned the corner into the living room, and stood there in utter shock.  There, in front of the tree, was a brand new, shiny green Schwinn 10 speed bike!  ( I know, you saw that coming, but bear with me)

I sat on the end of the couch, and stared at it for probably 15 minutes.  I just could not believe it.  They had so completely convinced me that I was not going to get the bike that I was just totally blown away.  I finally noticed that I was sitting there in my underwear, and I was starting to get cold.  I decided to jump back in bed, so I made my way back to my bedroom.  I laid there in bed for a few minutes, not even able to really believe the bike was there.  In fact, I was so afraid that it was just wishful thinking, or a dream, that I got up, went back into the living room and touched the bike, just to be sure it was real!  I went back to bed for a while, and waited for everyone else to get up.  While I lay there waiting, I was just in seventh heaven.  I got my bike!
That also set the stage for never completely  believing my parents again when they said no…..  but I don’t  think they thought of that at the time!
Oh, and the very first time I rode that bike, later that morning, I promptly ran into the back of a parked car, while trying to watch the gears change!

Good Christmas holidays before and after, but this is the one that I will always think of first.  I hope your holiday will be a good one. 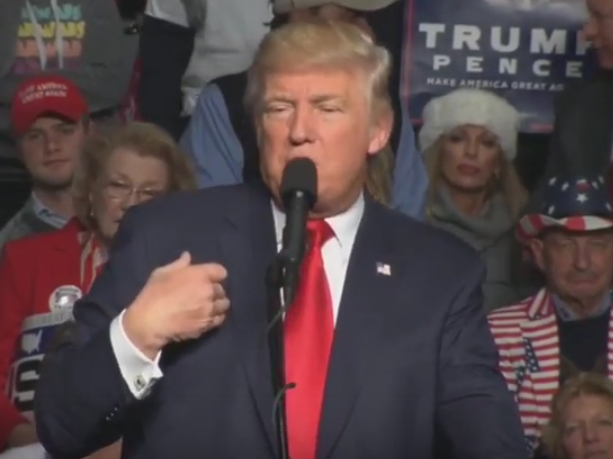 On Thursday, December 15, 2016, Donald Trump was in Hershey, Pennsylvania, at another of his “Thank You” rallies. Apparently still on the campaign trail, he spent an hour going on about how terrible things have been under President Obama, and how great they’re going to be once he’s sworn in. Hey, Donald? Barring some historic action by the Electoral College, you won. How about working on building your administration? With people other than Fox News talking heads? (what is Fox going to do when all of their “talent” is no longer available? I suppose that’s one way of creating ‘new’ jobs!)

“The murder rate, in the United States, is the largest that it’s been in 45 years. Nobody knows that. They (the media) don’t tell you that.”  This was in a segment where he’s talking about building the wall, and illegal immigration, and how that was the reason for the high crime rate.

Then Hannity comes back to reinforce the point that it’s illegal aliens who are largely responsible for that “fact”. Then into the interview with the Sheriff, who did very well holding to the facts in the matter, and not letting Hannity spin his words, regardless what the lead-in might lead you to believe about the case.

The homicide rate has been dropping every year of President Obama’s time in office (and before. Even in W’s terms). I found the information in a quick Google search. You’d think Trump’s speech writing team would bother to make the same effort.

Hannity certainly didn’t call out Trump for his falsehood, and so far neither has anyone else that I’ve seen. President Obama has been raked over the coals by the right-wing for his “if you like your doctor, you get to keep your doctor” comment regarding the Affordable Care Act. Trump blatantly lies* about the homicide rate in this country, and… crickets.

This seems to be a habit with Trump and his supporters. The truth is expendable, when a good lie generates your applause line. Fox News certainly won’t call out Trump for making false statements, so we’ll have to see who will.

Oh, by the way, did you see that Fox News finally came out with their own “independently verified” report that the Russians really did hack US, and try to swing the election? And that Putin was in the thick of it? They’ve for so long toed Trump’s line that there was no Russian involvement that I wonder how this will creep it’s way into their broadcasts? Will they maintain they knew and broadcast the truth all along? Do they even care that we have the video in our archives? Probably not.

So – largest murder rate in 45 years. Except that it’s not. But maybe the FBI is lying, and Trump is right. And building the wall will fix that.

I think you can see why Trump “loves the poorly educated”.

*of course, to be a lie, Trump has to know the truth, but make his statement anyway. Maybe he believes what he says, I don’t know. I do know the information is wrong, and it’s easy to verify. Maybe he’s not technically lying, but he’s telling a lie -i.e., something that’s not true.

Seems Mr. Nunes (or more likely someone on his staff) doesn’t appreciate my questions.

I’ve asked a couple of other questions, either on Twitter, or through his Congressional web page, generally without response. I did write a blog here complimenting him for voting yes on the violence against women act, so while I’ve been critical fairly often, it’s not been completely negative.

Whatever the situation, I must admit I’m a bit tickled. Blocked from his Twitter feed. Quick, hand me a fan and find me a fainting couch!

“World AIDS Day is held on the 1st of December each year and is an opportunity for people worldwide to unite in the fight against HIV, show their support for people living with HIV and to commemorate people who have died. World AIDS Day was the first ever global health day, held for the first time in 1988.” – https://www.worldaidsday.org/

Some “fast facts” from the AIDS.gov website:
“More than 1.2 million people in the US are living with HIV, and 1 in 8 of them don’t know it.”
“From 2005 to 2014, the annual number of new HIV diagnoses declined 19%.”
“Gay and bisexual men, particularly young African American gay and bisexual men, are most affected.” – https://www.aids.gov/hiv-aids-basics/hiv-aids-101/statistics/

Currently, there are 36.7 million people world-wide living with HIV/AIDS. 1.8 million of those are children. A large percentage of those people live in sub-Saharan Africa. An estimated 35 million people have died from AIDS related illnesses since the start of the epidemic. – www.aids.gov

With treatment, HIV/AIDS has gone from a fatal condition, to a treatable disease. Although no cure currently exists, treatment with antiretroviral medications halts the spread of the virus, and the damage done to the infected person’s immune system.

The newest wrinkle is HIV/AIDS prevention is PrEP, Pre-Exposure Prophylaxis. “When taken consistently, PrEP has been shown to reduce the risk of HIV infection in people who are at high risk by up to 92%. The pill (brand name Truvada) contains two medicines (tenofovir and emtricitabine) that are used in combination with other medicines to treat HIV. When someone is exposed to HIV through sex or injection drug use, these medicines can work to keep the virus from establishing a permanent infection.” – https://www.cdc.gov/hiv/risk/prep/

Tulare County averages about 30 new HIV infections a year (2011-2013).  Condoms, regular testing, and PrEP are all steps to take to reduce the risk of HIV infection, and to prevent the spread of the disease.

theSOURCE LGBT+ Center will be offering, in conjunction with Clinica Sierra Vista, free confidential HIV testing, on Friday December 8, 2016. Testing will be available from 3pm to 5pm at 208 W. Main St., Suite B (downstairs in the Montgomery Square), Visalia.

World AIDS Day is a global moment of remembrance for those who have died, recognition of those currently infected, and to focus on the continuing efforts at prevention and treatment.
Image: https://www.aids.gov/